C&IT's sponsored guide to Ireland will help you find the most exciting destinations, hotels, venues, restaurants and convention centres when planning your next event.

Voted No.1 Overseas Destination in the 2009 C&IT Corporate Survey, Ireland really does mean business. From a brand new convention centre to state-of-the-art meeting rooms, Ireland offers it all in compact cities like Dublin and Belfast boasting easy transfer times. With a 'can do' attitude, impressive service levels and a more competitive approach, this is a great time to see what value Ireland can add to your next event. Also named "Friendliest Destination in the World" by Lonely Planet 2008, Ireland is sure to bring an easy and enjoyable experience for both the event organisers and delegates.

With over 100 air routes flying from 29 regional airports and less than an hour away, the island of Ireland has unrivalled access from GB. Getting around Ireland is easy. There are plenty of options from yachts and horse drawn carriages to vintage cars and luxurious executive coaches. For lists of suppliers visit www.meetinireland.co.uk

From breathtaking castles and hip hotels to purpose built centres like the new Convention Centre Dublin, which opened in September 2010 - Ireland has everything an event organiser could want.

We pride ourselves on the quality of our DMCs and have an extensive list available of professionals ready and waiting to assist you. They are highly qualified to customise programmes to your client's every need and whim. The industry is also supported by our regional convention bureaux, who are always eager to assist with any enquiries and requests. Find our full list of over 30 DMCs and 6 Regional Convention Bureaux on www.meetinireland.co.uk

For more information on holding your next event in Ireland, please visit www.meetinireland.co.uk or  contact:

English is the official language, with Irish (Gaelic) also used in the Republic of Ireland.

Easy access from the UK with over 100 flights daily from 29 British Airports.

Ireland is on Greenwich Mean Time (GMT), the same as the UK.

Whilst UK citizens do not require a passport or visa to enter Ireland, most carriers by air or sea require some form of photographic identity (ID), usually either a passport or driving licence.

Countless social / team building / outdoor activity options with breathtaking scenery and dramatic coastlines as a backdrop including gala dinners in historic Irish castles, world class golf courses, spectacular walks and horse or bike rides , not to forget the traditional Irish music and dancing and of course the unique Irish "Craic!" 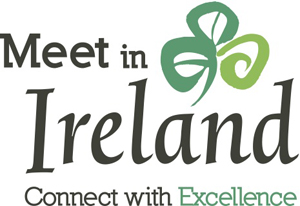 The forum for 900 people at the Convention Centre Dublin was named Finance & Professional Services Event of the Year.

From bustling Belfast to the rugged shores of Ballintoy, Northern Ireland is full of iconic delights.

6 of the best hotels in Ireland

A collection of Irish hotels for event planners to consider, from Adare Manor to Dromoland Castle.

The recently transformed 19th-century castle hotel is one of Ireland's leading five-star properties.

5 of the best... brewery tours

Our pick of beer and cider-makers, from Cornwall to Edinburgh, who offer tours and have private event space.