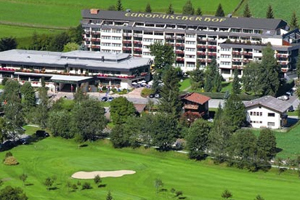 Number of meeting spaces: 3
Largest space holds: 120
This year's Undiscovered Golf Destination award from the International Association of Golf Tour Operators went to Austria, proving that there's more to the country's C&I offering than a glass of gluhwein. Situated in the Hohe Tauern National Park, near Salzburg, the hotel is one of the few in Austria to have its own 18-hole course. The 238-room hotel also has its own spa and there is a range of outdoor activities from balloon trips to panning for gold.There are another eight golf courses within a 40-mile radius of the hotel.
Contact: Elizabeth Gusterer, +43 64 342 5260
Web: www.europaeischerhof.at

Groups from both the EC and Nato have become regular visitors to La Tournette near Brussels. On arrival, players need to decide whether to tackle 18 holes on either the longer undulating American course or the more anglicised English course. The club specialises in organising private golf tournaments, while beginners need not feel left out and can hack around the nine-hole Orival course. Parts of the clubhouse date back to 1635, but it now hosts a fully equipped conference centre, as well as two restaurants that are both available for private dining.

Spreading out over some 300 acres along the banks of Lake Scharmutzelsee, just outside Berlin, A-Rosa boasts three championship courses, plus an additional nine-hole course. Ideal for sports fanatics, the resort also has an equestrian centre, tennis and yachting academies, and numerous hiking trails. There's also a state-of-the-art spa to wind down in, which features aroma baths, steam baths and a solarium, along with Asian-based treatments. The hotel has 195 double rooms, 16 suites and 32 garden-suite apartments.

A low-rise hotel built in a distinctive country house-style, the Sheraton is just ten miles from the centre of Rome and set in 175 acres of parkland. Overlooking the hotel's golf course, the Savoia restaurant can seat up to 180 people for private dining. For those with an insatiable appetite for the game, there are a further 12 courses within easy reach of the hotel. As well as a flexible, modern conference centre, there are 322 rooms and chalets, a fitness centre and tennis courts.

Switzerland is a golfing gem just waiting to be discovered. It has excellent settings and a range of venues perfect for smaller meetings. Rolex is just one of the UK companies to visit the Golf Parc Signal de Bougy, on the main route between Lausanne and Geneva. The 18-hole course is set in more than 200 acres of woodland, and the park's facilities include a clubhouse, a five-room conference venue and additional rooms suitable for private dining.

With a Grade I-listed hotel set in 350 acres of landscaped parkland and the celebrated Stoke Poges golf course, this is a quintessentially English venue. It is this Buckinghamshire setting that appeals to event co-ordinators such as Brian Briggs, from NCR (formerly National Cash Registers). "From a business point of view it's easy to get people to come along to seminars here because both the golf and the setting are fantastic," he explains. Briggs has staged several golf events at Stoke Park, and booked the ballroom and adjoining Penn Bar for a customer event recently. Stoke Park also has an award-winning spa that comprises relaxation rooms and an indoor pool complete with built-in hydro-seat Jacuzzis.

The 290-room Intercontinental opened in March 2005 and is the latest addition to the Aphrodite Hills Resort in Cyprus, with its 18-hole championship course and tennis academy. It is also the flagship European spa for the specialised Pevonia treatments, while the wellness centre offers infinity pools. Back in business mode, the hotel's flexible ballroom can be divided to provide a variety of different sized spaces with smaller break-out rooms.

Pricewaterhousecoopers, Procter & Gamble and Aventis are just some of the blue-chip companies to visit the Gloria Golf Resort. The complex has an 18 and a nine-hole course, set in pine forests at the foot of the Taurus Mountains near Belek. As well as golf, the venue offers Thalasso Asklepion Centre, which specialises in treatments using hot seawater.

The Polus Palace opened in May and is 20 minutes from central Budapest. With 58 rooms, the hotel is perfect for small incentive groups. The 18-hole golf course sits in a nature reserve and a series of interlinked lakes make for an intriguing set of water hazards. Inside, the Cezanne conference room has built-in cabins for interpreters, while two smaller meeting rooms benefit from natural daylight. The hotel's Kerubina Spa & Wellness Centre has its own 12-function adventure pool.

The NH Almenara reopened in May after the refurbishment of most of its 150 rooms, ten suites and Elysium Spa. This is a deluxe hotel with an informal atmosphere with manicured gardens and a testing 18-hole course. Still considered one of the best places in Europe for golf, there are five other courses nearby including the Real Club de Golf, Valderrama and La Reserva de Sotogrande.

Europe has some beautiful golf properties set along the coast or beside lakes, adding tranquility and, sometimes, picturesque hazards for the unwary golfer.

The Is Molas Golf Hotel (www.ismolas.it) occupies more than 1,500 acres of the southern coast of Sardinia. The complex boasts one of just three championship courses on the island. A second course is currently being developed and a third is planned. The hotel has 84 rooms, all with private balconies or terraces and access to a private beach. It has one meeting space that holds 110.

In Ireland, the Adare Manor Hotel & Golf Resort (www.adaremanor.ie) has won plaudits over the years for its mix of modern meetings spaces and the latest spa treatments set against a Gothic architectural backdrop.

The testing course is dominated by the 14-acre lake. There are three meetings spaces, the largest of which holds 200.

Back on the continent, the Hotel du Golf Barriere (www.summithotels.com) is situated in the middle of 27 undulating holes of golf along the Normandy coast. Just two hours from Paris, the 168-room hotel can also offer banqueting for up to 300, and all nine of its meetings rooms overlook the course. The largest space can hold 300.

The Iberian region is renowned for its golf. Down in the golfing bastion of the Algarve, the Tivoli Marinotel (www.tivolihotels.com) is set in the Vilamoura resort, and has 383 rooms. Some of Portugal's greatest courses are within easy reach. It has 17 meetings spaces, the largest of which can hold 1,200.

Opening this summer in the south of Tenerife, Abama (www.abamahotelresort.com) is a new £150m luxury resort with 300 rooms and a selection of villas.

The new 18-hole course is riddled with challenging hazards, while the hotel offers a luxurious wellness and spa centre. The largest space in the dedicated conference centre holds 400.