I’ll be honest, I had no idea what to expect from Azerbaijan. In fact, if you asked me to point to it on a map I’d have embarrassed myself. And so my geographic ignorance, combined with the fact that I’d never consciously seen an image of the country, meant that I couldn’t even picture the destination I was about to visit.

But if I forced myself to, I would have conjured some sort of desert settlement, not too dissimilar to Anakin’s home planet in Star Wars. Oh how wrong I was...

My plane landed in Baku at 6.30am and instantly my limited preconceptions were flipped upside down. Heydar Aliyev Airport is one of the best airports in the world. And this isn’t just my personal opinion of the ultra-modern building. In 2018, Skytrax awarded the airport five stars, a status only 11 other airports in the world have been granted.

Approximately 30 minutes later, I arrived at Boulevard Hotel Baku in the heart of the White City district. It is the largest convention hotel in Azerbaijan with 818 guest rooms and a 1,300 square metre pillar-free ballroom that can host 1,000 conference guests.

After some downtime exploring the facilities (including the heated indoor pool) and enjoying views of the Caspian Sea, it was time to head to Dreamland. That’s not me saying I went to bed, rather it is the name of a new development that consists of villas, residencies, a hotel and a golf club complete with an 18-hole, 72-par course that meets international standards.

Given an inexperienced golfer like myself shouldn’t be let loose on such a beautiful course, I stuck to the driving range where I surprised myself (and the golf pro coaching me) with the distances I managed to hit. I then had a well-deserved lunch inside the golf club’s restaurant. 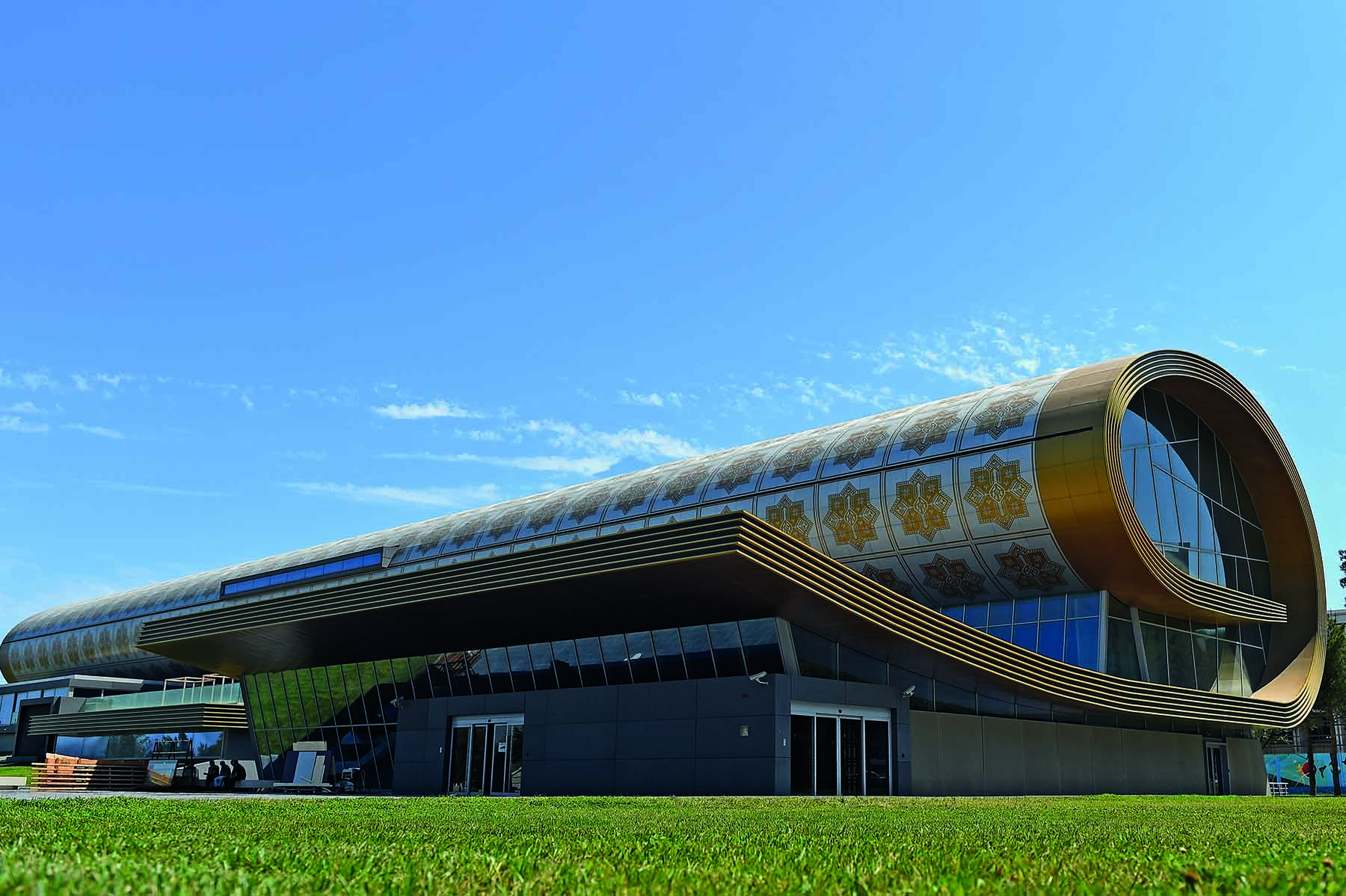 The next stop was the Azerbaijan National Carpet Museum (above), located right in the centre of Baku, and just a short transfer away from Dreamland. This may sound like a strange concept for a museum but the art of carpet weaving has been an important part of the Azerbaijani culture for centuries.

And the carpets themselves really are works of art, each with their own display of colours, patterns and intricate detailing. The oldest piece on display in the museum is the 17th century carpet Ajdahali (The Dragon).

But what is equally as impressive is the architecture of the building. Shaped like a giant rolled-up carpet, the museum is one long cylinder with carpets being displayed on the curved walls. It also has a number of event spaces across multiple floors.

There is a small 46-seat auditorium, a conference room for 60-70 people and a 240 square metre events and exhibition hall. But the biggest spaces are the lobby (600 square metres) and the third floor of the exposition (500 square metres) both of which can be privatised.

After the museum it was time to pick up the pace – literally – and show off my driving skills in a go-kart. It’s an activity that always lends itself well to competitive groups and I wanted to win. But aside from desperately trying to secure the best lap time, I also enjoyed the thrill of it all. Sometimes a little too much, causing myself to spin-out or go off-road, but the course and the safety procedures in place ensured I was never in harm’s way.

The first day then ended with a meal at Shirvanshah Museum Restaurant – an incredibly impressive venue that is draped head-to-toe in Azerbaijani culture. The historic building and all the art and artefacts within it make it look like Aladdin’s cave, while the food and live performances provide a rich experience for all the senses.

The second leg of my journey in Azerbaijan was to Gabala, about a three-hour drive, or one-hour flight, from Baku. Gabala is serviced by its own international airport, however flights are usually seasonal and are limited to a handful of foreign destinations. I was travelling by car and so left first thing in the morning.

About halfway through the road trip it was time to stop for a break. But not at some service station off the main road. No, I would be enjoying the services of Shamakhi Palace – an incredible luxury resort perched on the slopes of the Greater Caucasus Mountains.

As I stood on the immaculately landscaped grounds of the hotel, I couldn’t help but be in awe of the lush green mountains that surrounded the property on all sides.

I arrived in Gabala just in time for lunch at the Gabala Xanlar Restaurant, however this was no typical eatery. The restaurant is actually a collection of huts and canopied tables that are split up and divided by rock formations, trees or even small natural streams – the natural landscape has been complemented in a truly beautiful way. It’s such a magical place that I half-expected some sort of fairytale creature to collect my plate once I had finished the delicious food.

Something else I didn’t know about Azerbaijan is that the country makes incredible wines, a lesson I would soon learn after arriving at the Savalan ASPI Winery, just a short distance from the city centre. After a tour of the cellars and an insight into the production process, I was treated to a relaxed tasting session, while watching the sunset over the vineyards.

Once I had enjoyed more than just a taste of Azerbaijani wine, it was time to head to Sheki (just over an hour in the car) to check-in at the Marxal Resort & Spa for the night. DAY

Simply put, Sheki is beautiful. The small city is nestled among rolling green mountains and abundant in medieval buildings.

My first stop was the Albanian Church of Kish, built in the Middle Ages. The historic building is tiny compared to more traditional churches and now acts as a museum. But what makes the site even more interesting is that some of the relics and remains found below the 12th century foundations, date back as far as the Bronze Age and are now on display there. 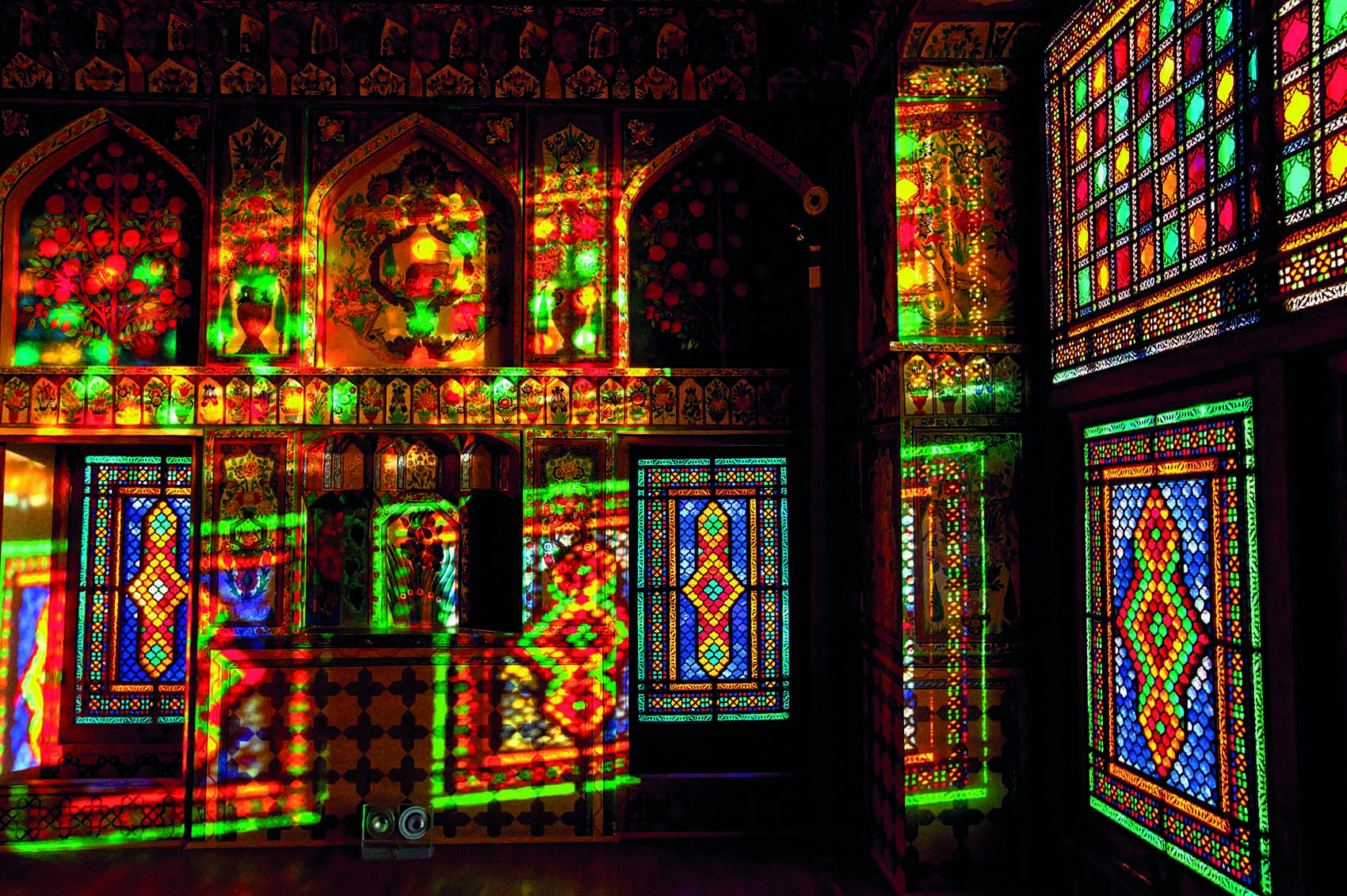 My next stop was Sheki Khans’ Palace (above), built in 1762. It is an incredible building that is uniquely identified by the windows that cover the majority of the facade. However, these aren’t ordinary windows, as they are actually a stunning example of the ancient art of ‘shebeke’ – wooden lattices filled with stained glass and put together without any form of adhesive.

These windows then create a surreal experience inside the palace as the sunlight pours through the glass and turns the rooms into giant kaleidoscopes.

I found the shebeke fascinating and beautiful, so I was glad to be heading to the city’s Craftsmen House. Here I could see ancient practices in action, from those making traditional Azerbaijani instruments such as the Tar, to those producing local silk (a testament to the Silk Road heritage of Sheki). But it was seeing the shebeke master at work that really captured my attention. The tiny wooden puzzle pieces are made to slot into each other, while each piece of coloured glass is then cut specifically to slide inside the shapes created.

It made sense then to have lunch at Shebeke Restaurant, inside the Sheki Palace Hotel. The hotel has 46 rooms, nine of which are suites, plus a conference hall that seats 220 and a meeting room for 10. The restaurant can accommodate 50 people and serves all of the traditional Azerbaijani cuisine you’d want and expect in such a culturally rich city. I had my fill of dolma and baklava before returning to Baku, via the Gabala Shooting Club.

I’ve never shot a gun before, nor have I ever been that eager to, but I am competitive and this was another opportunity to compete. First, there was the indoor sniper challenge, which requires shooting a very small target board from far away. This was followed by archery, where you can shoot a choice of targets placed at different distances. And then finally, there was clay pigeon shooting outside, which requires using a shotgun to hit moving targets that have been propelled through the air.

After honing my accuracy with a range of different weapons and contemplating my suitability as a secret agent, I had a much more peaceful and tranquil close to the day. This involved taking a cable car into the mountains, just in time for sunset. Here I saw the sky slowly burn away causing the mountain tops to glow with a pinky hue that blended into a deep green of the forests that crawled their way up the crumpled earth.

On my last full day in Azerbaijan, I woke up back in Baku and it was my mission to experience both the modern and the medieval aspects of the city. And so, I started at the spaceship-like Heydar Aliyev Centre – designed by Zaha Hadid – to visit The Classic Car Exhibition that was showcasing the first automobiles, as well as the most futuristic supercars. 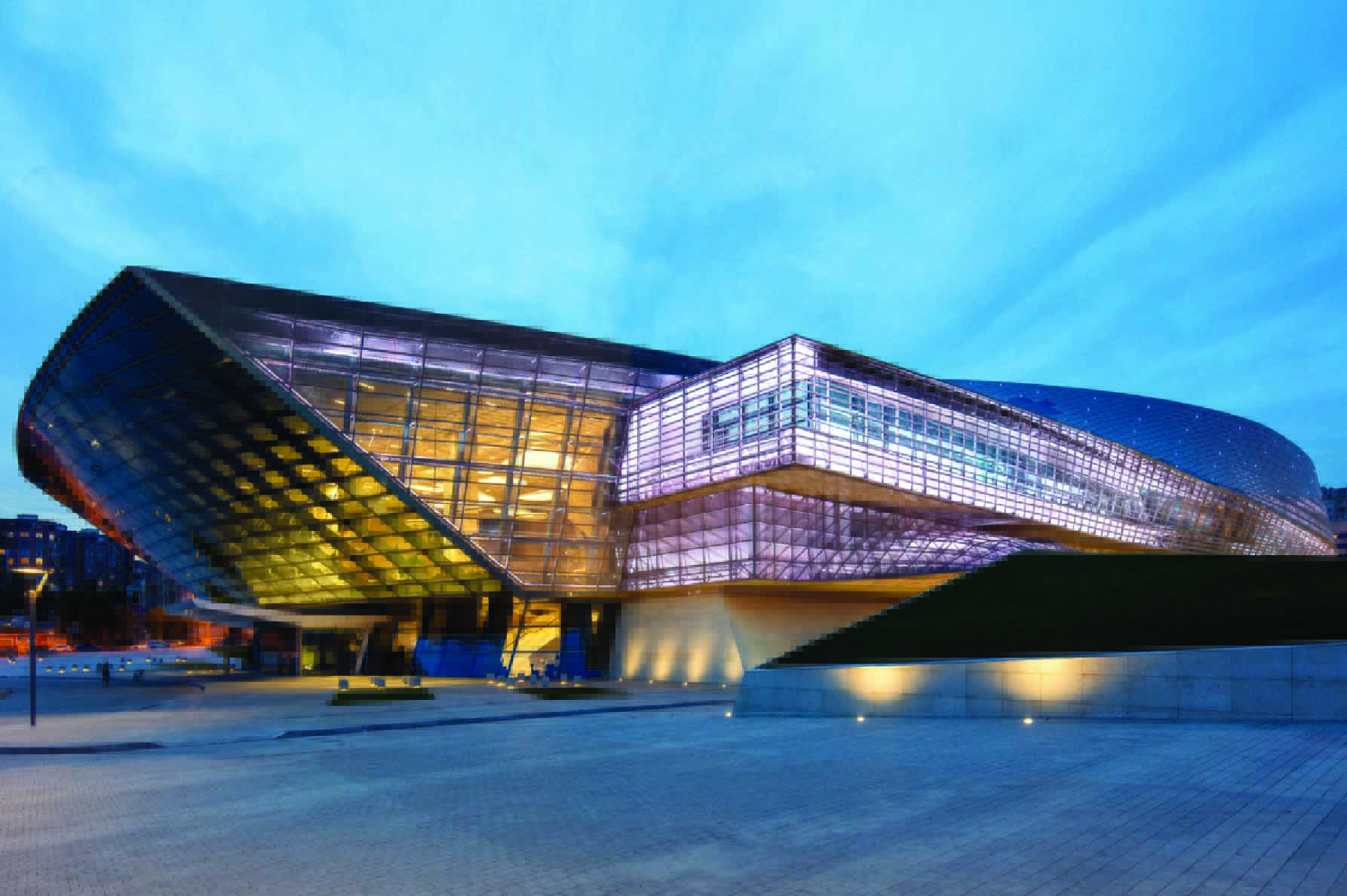 The Heydar Aliyev Centre also sits right opposite the Baku Convention Centre (above), another very modern building with an auditorium that can seat up to 3,500 people. This is further supplemented by 15 additional meeting rooms. But there was one more piece of modern architecture that I had to visit.

Baku’s skyline is very noticeably crowned by the striking Flame Towers, three towers that reflect the sky during the day and are illuminated at night.

While two of the towers are made up of apartments and offices, one of the towers is the Fairmont Baku Hotel. It has 299 guest rooms and suites, as well as 2,500 square metres of events space – including two ballrooms, meeting rooms and outdoor venues.

But of course, it is the views that make the Fairmont Baku Hotel stand out. And as I looked far and wide at Baku below, I saw my next port of call – the historic part of the city.

While I loved Baku’s modern architecture, I was also keen to see the heart of the destination, the walled Old City that juxtaposes the modern tower I was standing in. As soon as I entered the walls, I felt like I had stepped back in time.

Cobbled streets and sand-coloured buildings were accented with greens from scattered foliage throughout and deep reds from the Azerbaijani carpets that decorated walls and hung from windows. And, despite the ruins and history all around, the streets were immaculately well-kept – a reflection of the respect that the landmarks command.

It was also a surreal spectacle to look up from the streets of the Old City and see the Flame Towers in the distance – a reversal of the views I’d just experienced. What’s more, the brand new towers make for an intriguing perspective when you’re surrounded by buildings that date back to the Middle Ages.

But it was this that became my takeaway of Azerbaijan, my new image of a destination that was previously undiscovered to me – a beautiful combination of the past and the future merging together in the present.

7 incentive ideas in Melbourne and Victoria