Choices include Ultimate Power, an 80’s themed night dominated by power ballads and glam rock, Guilty Pleasures, a night out perfect for delegates to let loose under the lights with live bands, cabaret performers and party anthems, and, the piece de resistance, Sink the Pink. With a headline act and a new mystery room, expect extravagance and flamboyance.

Event caterers Nigel’s Food & Design is on hand for traditional Christmas cuisine from carved turkey to festive bowl food, alongside an open bar.

Troxy’s stunning Wurlitzer pipe organ, which happens to be the largest in Europe, can also be used for low-key Christmas events alongside film screenings and carol singing.

Any of the three packages on offer can be booked seven days a week for groups of 300 to 1,500. 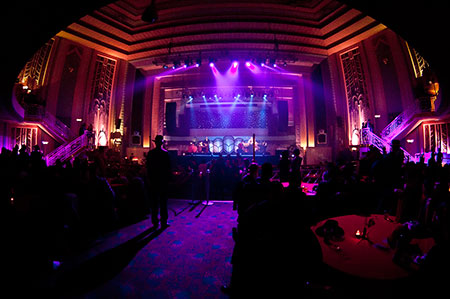 Delegates won’t want to be late for the Barbican’s ‘Alice in Wonderland’ themed Christmas party packages this year. On arrival, guests will stumble down the rabbit hole and into the art venue’s stunning Conservatory, where groups of between 150 and 650 can enjoy two bespoke packages lasting up until midnight.

For a standing reception, delegates will receive three hours of unlimited beer, wine and soft drinks, as well as finger food served at numerous chef’s stations, DJ and theming. The venue’s dinner and dancing package includes a three-course banquet with wine and petit fours to finish.

"Christmas in the Conservatory is always magical but this time it truly will be a wonderland," said Oliver Hargreaves, deputy head of sales at the Barbican. "The Conservatory is one of the city’s best kept secrets but, with an extra dose of madness this Christmas, it’s going to be sensational for guests.

Paparazzi, giant Oscars and freshly made popcorn on arrival, Christmas at The Mermaid and the River Rooms puts delegates centre stage. ‘Let the Show Begin’ is the riverside venue’s theatrical-themed Christmas party offering, beginning with a drinks reception before taking a seat for dinner on The Auditorium's 300-capacity stage.

The night ends with the group’s very own Hollywood-themed after party with a DJ and unlimited drinks to see the night through.

All of the packages include room hire, planner’s choice of festive menu, unlimited drinks, a dedicated event director, and a private DJ, all of which can cater for groups between 50 to 1,000 across the venue's range of event spaces. 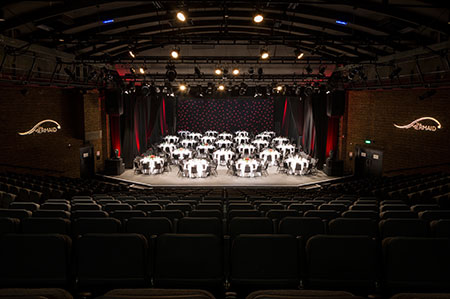 The Royal Institute of British Architects, Marylebone, will be almost unrecognisable this Christmas when the circus comes to town. The venue’s Florence Hall will transform into a circus tent with acrobats and masked waiters serving a selection of street food and unlimited drinks.

"Deciding on a Christmas party theme is extremely important as it sets the tone for an event," said RIBA Venues head of venues Stephanie Elliott, who was inspired by a team outing to the Cirque de Soleil. "The theme not only wows but transforms the event space into a different world."

Guests are also being encouraged to find their inner entertainer and don feathers, masks and other fun disguises. 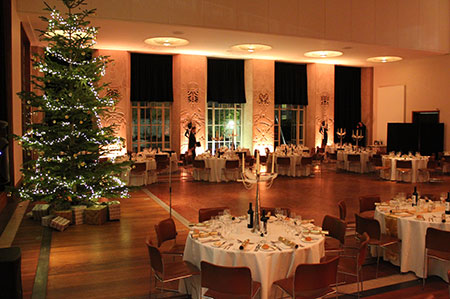 Twickenham Stadium is offering corporate partygoers the chance to fall into the world of James Bond with a private and shared party package.

The home of rugby will be decked out in suave style, courtesy of prop hire agency Theme Works, with guests being able to flit between casino tables and the cocktail bar.

Both packages include a dedicated event manager, as well as a two-course festive carvery and DJ.