The past 18 months have seen a boom in understated luxury as Mandarin Oriental and Shangri-La made their mark in the city of style.

This, swiftly followed in spring 2012 by the arrival of the sleek W Paris Opera, marked an increase in competition in the high-end accommodation offering in the city, but will the palace hotels be the cream of the crop in 2014 and beyond? Some of Paris' most iconic grandes dames have closed their doors for a complete renovation and luxury makeover to ensure their pole position at the top of any visitor's list.

The legendary Ritz Paris on the Place Vendome hasn't seen a major renovation since 1979 and closed its doors in August to begin a major programme of improvements expected to last more than two years. The hotel is set to extend its elegant ballroom, add more suites and a new restaurant, as well as overhauling its AV and technology throughout. Meanwhile, the palatial Hotel de Crillon is set to close next spring to add a new spa, following a refurbishment to its historic facade. 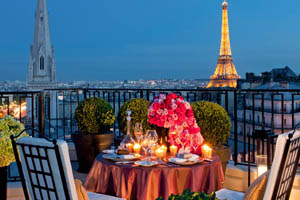 An extensive renovation is also planned for one of the doyennes of the luxury scene in the city. The Four Seasons Hotel George V will stay open during its revamp, which will see the addition of contemporary touches including luxury mini bars and televisions in the mirrors. This will be complemented by the new Penthouse, with its six terraces offering a 360-degree view of Paris and its most famous monuments, plus 160m2 of luxury space set to please the most discerning of VIPs.

Experts answer key FAQs about the tricky decisions businesses need to make around furloughs and offer guidance on the job retention scheme.

WRG’s Ben Atherton predicts how the industry might adjust when normality returns to live events.

Part four of C&IT’s global Impact of Coronavirus Report, we find out which regions are most concerned about job security.