Manhattan's hotel landscape changes at a lightning pace. Hotels are the lifeblood of the city, and new properties open with astonishing regularity, even in the economic downturn.

Among the flashiest is Trump Soho, which brings 391 rooms to Lower Manhattan, and has a bar on its 46th floor for up to 150 guests. Equally glamorous, the Chatwal (below) gives Midtown a fashionable touch, having moved into a trendy beaux-arts building that was formerly the Lamb's Club. The Kimpton chain, known for its affordable, chic hotels, opened the Eventi in the Chelsea neighbourhood. The Eventi has 292 rooms and 1,860m2 of meeting space. 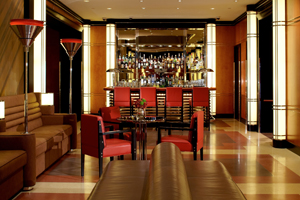 A huge landmark hotel that opened last summer is the Intercontinental Times Square, which brings 930m2 of event space to central New York, including the impressive 370m2 Gotham Ballroom. In May 2010, Starwood Hotels ventured outside Manhattan with the Sheraton Brooklyn New York. The 25-storey contemporary hotel features 321 rooms and 360-degree views from the rooftop lounge. The Sheraton Brooklyn marks the first full-service hotel to open in Brooklyn in more than 12 years and is the first of two Sheraton hotels that made their New York debut last year - The Sheraton Tribeca New York Hotel opened in autumn.

Starwood is also rolling out its Aloft brand in Harlem, with - unsurprisingly - loft-style apartments that reflect the design values of the W hotels brand. With on-site parking and closer to the airport, Aloft Harlem's rooms should attract those looking for space away from the intensity of Manhattan.