Dating back to the late 19th century, this grand venue has hosted eight Open championships, and is consistently rated the best golf course in England. It is one of the world's most famous links courses, a challenging 18 holes with the Irish Sea for a backdrop. It doesn't have its own hotel, but nearby high-end options include the Prince of Wales and Ramada Plaza. Ricoh is among the recent corporate guests. www.royalbirkdale.com

Not one, but two Arnold Palmer-designed courses complement this luxury destination in the scenic Irish countryside. The venue hosted the 2006 Ryder Cup - the first Irish venue to do so. The club's Kildare Hotel is one of the highest rated in the country, with 69 rooms and 19 apartments, complete with spa and even a nearby river for fishing. Conference facilities for up to 300 are spread across a variety of spaces, from the hotel to the clubhouse. www.kclub.ie

France isn't predominantly thought of as a golfing destination, but this course, 30 miles north of Paris, is believed one of the best on the continent. One of the oldest courses in the country - it dates back to 1909 - it was laid out by an English architect and is surrounded by the Chantilly Forest. Nearby accommodation includes the four-star Dolce Chantilly hotel and the three-star Hotel du Parc. www.golfdechantilly.com

Set in the resort of Sotogrande in Adalucia, this single 18-hole course is another of Europe's legendary clubs, built in 1974 by leading course architect Robert Trent Jones. It welcomed the 1997 Ryder Cup, and is famed for its two-tiered green on the fourth hole. The clubhouse and restaurant have been recently refurbished, and Volvo was among the corporate brands to visit this year. NH Almenara, NH Sotogrande and Gran Hotel Elba Estepona are the best local hotel options. www.valderrama.com

Slicing through a verdant pine forest, the course benefitted from a 2004 facelift, and is around 20 minutes from central Bremen. The par-74 course is just over 100 years old and its parkland location, replete with rivers and natural obstacles, makes it a popular challenge. High-end hotels in Bremen include the country-house charm of the Park Hotel or the recently renovated Golden Tulip. www.club-zur-vahr.de

Jaguar and law firm Ward Hadaway are among the corporate guests at this rising star of the North East. Opened in 2010, the course is centered around an 18th century red-brick Gothic manor house, and is the longest championship course in the UK. Eight meeting rooms can welcome up to 250 guests, and the hotel has its own spa and fine-dining restaurant. The resort is surrounded by 375 acres of rugged North York Moors. www.rockliffehall.com

Just a couple of years old but already making inroads in a competitive Irish market, the two Nick Faldo-designed courses are laid out on a spectacular 600-acre peninsula with an iconic 10th hole surrounded by water on three sides. The resort includes a 120-room hotel, a fine-dining restaurant and a Thai spa with six treatment rooms. There are six conference and event spaces for up to 400. www.lougherneresort.com

June 2010 saw this major new opening on the European golf scene. Sitting in prime countryside between Alicante and Murcia, one of the fastest growing regions for golf, the par 71 course is carved out of a spectacular gorge, and is part of a major development, which also includes a beach club and apartments. Unik Cafe offers golfers a fine-dining experience, while a wide variety of rental villas give visitors a comfortable stay. www.aworldapart.es

It is hard to make an impression in such a golf-centric region, but the new course (part of the Quinta de Lago stable), opened in 2009 to much acclaim. Surrounded by established clubs, the course draws heavily on natural features and is flanked by pine and heather. After a round, Caso de Lago restaurant serves up high-end Mediterranean food with views across the lake. In keeping with Iberian resorts, accommodation is mainly in the surrounding villas for rent. www.quintadolagogolf.com

Not a new club per se, Krakow Valley Golf and Country Club is in an emerging region for golf. Eastern and central Europe offer great value. US-designed, this 7,200 yard course is defined by surrounding forest and deep bunkers. The onsite Hotel Pacoldi would suit smaller groups with just 16 rooms, but the meeting space can hold up to 300. www.krakow-valley.com 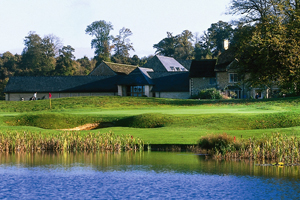 Pre-event planning: The event was designed to build relationships and present to some existing clients, so meeting facilities as well as a good golf course were required. Martyn Coyn, head of consultancy services at Microsoft and the event organiser, said it was an easy lead-up: "I'm a member at the club and with the new hotel being opened, I thought it had become a great place to take a group of high-level executives. The resort also just offered the best package, so it was a simple choice really."

Challenges: Paul McLean, resident PGA professional at Bowood, said: "With Microsoft's event being a Pro-Am day, it was Bowood's role to arrange the PGA involvement for the tournament and all-related administration. We also were responsible for the allocation of golfing professionals. Alongside this activity, Bowood organised everything from reception on arrival, allocation of hotel rooms and on to the gala dinner - indeed every aspect of accommodation and hospitality, as well as practice facilities, prizes for the golf day and branding around the venue."

Solutions: McLean reported that it all went smoothly: "The logistics of 120 people playing golf at the same time - alongside the catering requirements - involved a lot of attention to detail. Due to the level of our planning, we were fortunate that nothing blind-sided us on the day."

Post-event analysis: Coyn described the event as a perfect day. "They all sent very complimentary notes," he said. "Everyone wrote how all the staff at the resort had been great, and that nothing had been too much trouble for them. They all loved the teeing off photos with which we presented them, and the operating officer from Linklaters was enquiring into running their own corporate day there, so impressed had he been." Microsoft is already lining up next year's event at the venue. MacLean said: "Feedback from a client and their guests is always extremely valuable and we are delighted that the day was so positively received by everyone. This was our first event for Microsoft and we very much enjoyed working with them in such a mutually supportive and productive manner."